As I prepare for a presentation for this year’s Thriving Workplace Event; I’ve been reflecting on the shift we need to make in Corporate Health and Wellbeing.

More specifically the conversation that is needed around the ‘Why’. A conversation that takes us beyond the programmatic approach that often sees Health and Wellbeing as a ‘discretionary spend’ and a ‘nice to have’. I wonder if we will ever see corporates speak to Health and Wellbeing the way they talk to and report on Gender equality, domestic violence and; diversity and inclusion?

And what a week for reflection it has been to help shape this conversation and it’s only Wednesday.

On Monday the ‘Business Roundtable’ of America; announced a “new Statement on the Purpose of a Corporation signed by 181 CEOs who committed to lead their companies for the benefit of all stakeholders – customers, employees, suppliers, communities and shareholders.” These CEO’s have signed up to taking on a broader, long term view in addressing societal issues; this includes the health and wellbeing of their own people.

It was also on Monday (thank you Medibank and the RAP working Group) I attended a pre-screening of ‘The Australian Dream’ an inspirational, raw and confronting documentary on race, identity and belonging through Adam Goodes’ story. If you haven’t seen it is a must see for all Australians. The stance Adam made in the final years of his AFL career was immense and continues today. The sheer number of corporates who signed up to the #Racism.ItStopsWithMe Campaign suggests there is a clear community expectation on corporates translating Purpose to Action.

And then there was the gift that is Alan Jones and his tirade against Jacinta Ardern; possibly one the most authentic, progressive and humanistic politicians to have served in any Country. As droves of corporate sponsors move to cease their support of 2GB and I wonder if the tide of community and organisational voices have stepped up.

With one in two Australians likely to have a chronic health condition in their life time including; mental and physical health and some 12.8 million people employed in a country of around 25 million people. Is it time for Corporate Australia to think differently on the social impact we could collectively make to the health of Australians and the impact to the sustainability of our overall economy?

In the meantime between now and next week’s Thriving Workplace Event, I’ll continue to ponder the possibilities …. hope to see you there. 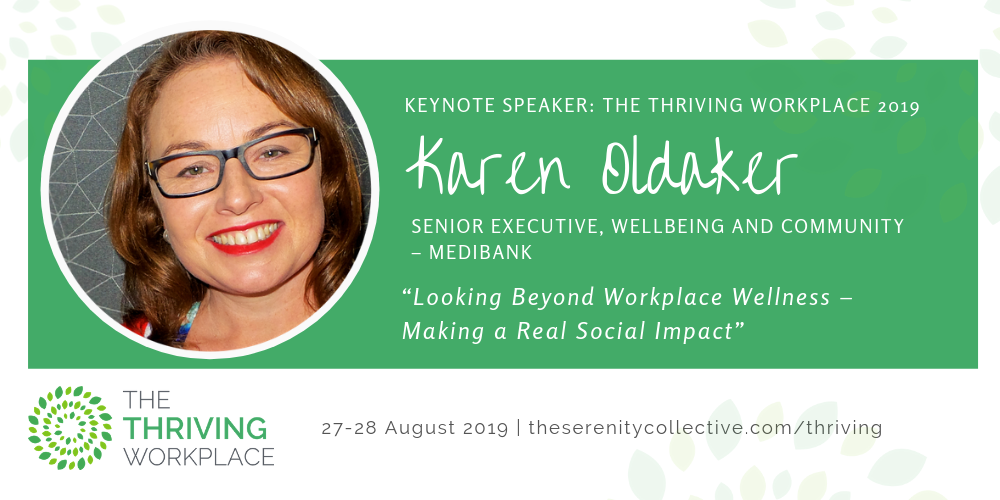 Karen Oldaker is joining us next week at the 2019 Thriving Workplace Event, leading a Co-Creation Session on: “Looking Beyond Workplace Wellness – Making a Real Social Impact”.

Karen believes now is the time for companies to take their ‘purpose’ further, with corporate Australia increasingly focussed on the social impact they can make and corporate boards seeking a ‘social licence to operate.’ With that in mind, what can leaders and executives do to achieve a better and more sustainable future for all?